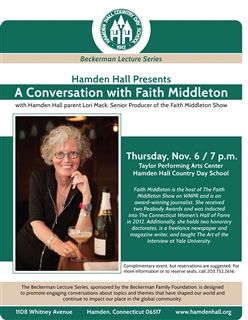 Hamden Hall Country Day School hosts NPR award-winning journalist Faith Middleton at a complimentary event open to the public Thursday, Nov. 6, at 7 p.m. in the school’s Taylor Performing Arts Center.
The event, part of Hamden Hall’s Beckerman Lecture Series, is titled “A Conversation with Faith Middleton.” Also on hand will be Middleton’s senior producer, Lori Mack, whose daughter attends Hamden Hall.
Middleton will tap into the theme of her book, The Goodness of Ordinary People, a book of true stories from her WNPR callers. She will also answer audience questions.
Hamden Hall’s Beckerman Lecture Series, sponsored by the Beckerman Family Foundation, is designed to promote engaging conversations about topics and themes that have shaped our world and continue to impact our place in the global community.
Middleton generates discourse on a near-daily basis as a result of being the host of The Faith Middleton Show on WNPR. Middleton has received two Peabody Awards and was inducted into The Connecticut Women’s Hall of Fame in 2012. Additionally, she holds two honorary doctorates, is a freelance newspaper and magazine writer, and taught The Art of the Interview at Yale University.
Reservations for the complimentary event are suggested. For more information or to reserve seats, contact 203.752.2616.
Back